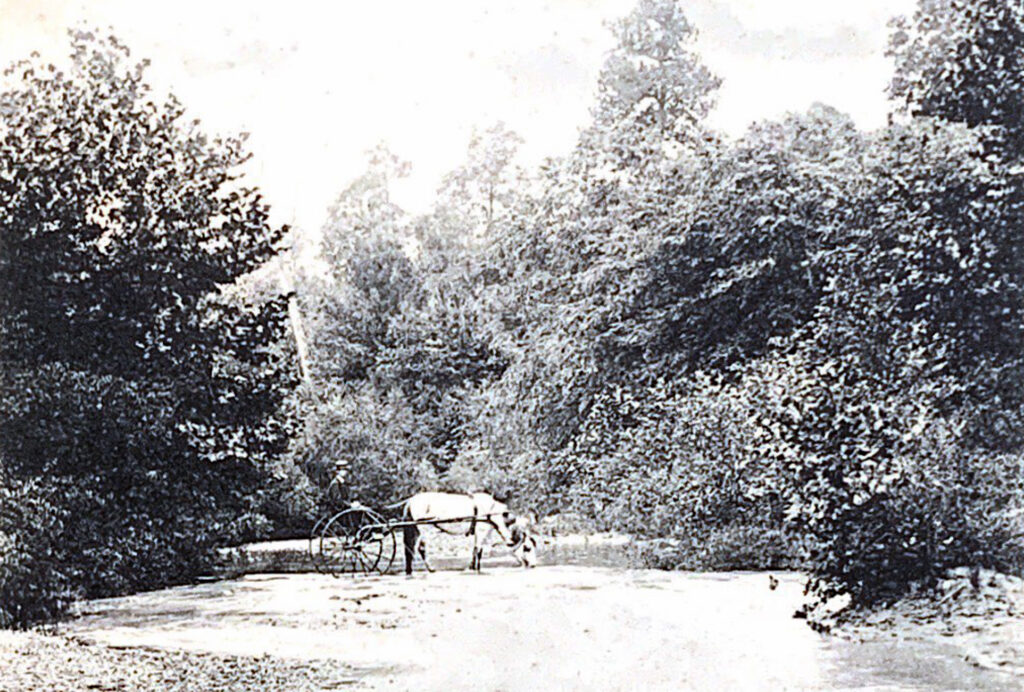 Established in 1795, Jackson was one of the earliest settlements in the Northwest Territory. Initially named “Salt Lick Town”, it was the location of the Scioto Salt Works, Ohio’s pioneer industry.

Jackson is placed at the geographical center of the county, nestled along the banks of the historic Salt Lick Creek. Archaeological evidence indicates that  native and animal populations dating aback to prehistoric times gathered at the licks to obtain salt. Due to the presence of the salt licks, many trails were forged from all directions into the licks like the spokes of a wagon wheel. These trails were so well-engineered by the buffalo and other animals in regard to gentle grades and best directions, that many evolved into highways in later years. A look at a modern road map illustrates this. Many fossils of ancient and extinct species were also found in these areas.

One species of the prehistoric mammoth, “Elephas Jacksoni”, was discovered here, thus carrying the name “Jackson”. There are numerous accounts of early explorers and pioneers who were brought to the licks by their Indian captors to help make salt, including Daniel Boone. Even the celebrated explorer Christopher Gist is said to have visited here.

Settlement did not begin until September of 1795, following the signing of the Treaty of Greenville. A community began to grow due to the rising demand for salt. Within a few short years, this influx of people formed a community. It was named Salt Lick Town.

In 1798, Ross County was formed. The southeast corner of this county was Township Seven, Range Eighteen. This is the township in which the Scioto Salt Licks were located. Despite this being a part of Ross County, the Federal government held title to the licks themselves. The United States Congress set aside a tract of land equivalent to a township (six miles square) comprised from parts of four townships around the salt licks. This became known as “The Scioto Salt Reserve”. The main stipulations were: Anyone could live within this reservation and produce salt there; however, they could not purchase any tract of land lying within the boundaries of the reservation.

Due to the rapid influx of settlers, salt was essential–used extensively for the preservation of meat and seasoning. Salt had previously been transported from the eastern part of the United States, making it very expensive. Those who first began producing salt used single kettle affairs. This was a slow method and production yielded only small amounts. Soon, however, more ambitious methods of producing salt began. From single kettle affairs the new “salt furnaces” were arranged, with 50 to 60 kettles. These were capable of producing about eight bushels of salt per 24-hour period, equivalent to around 400 pounds. This required boiling 3,600 gallons of brine-rich waters drawn form the local salt licks.

Each year from 1800 on, the number of furnaces increased. Finally, by 1910, there were a total of 14 furnaces located along the valley of the Salt Lick Creek. The amount of wood-based fuel required to operate the furnaces was incredible. The land, which only a decade ago had been heavily forested, soon became striped bare of its magnificent forests. It was shocking: the complete disregard in which the land was being handled. William Henry Harrison, who would later become President of the United States, visited the area in 1800 and recommended to the Congress that the Scioto Salt Reservation should be leased to prevent any further waste and destruction to the salt lands.

After Ohio became an official state in 1803, one of the first things to be addressed by the new legislature was how the Scioto Salt Licks would be managed. It was determined to appoint a “Salt Agent’ to oversee all future operations. Taxes were levied on all furnace operations based on the number of kettles and their capacity. New regulations and changes to existing ones became a regular part of the alt works operations until their end in the mid 1820s.

Beyond 1810, production of salt at the licks began to diminish. This was largely due to the discovery of a much richer salt brine along the Kanawha River in what is now West Virginia. The brine was twice the potency of that at the Scioto Salt Works. This meant that twice as much salt could be produced from the same amount of salt brine.

By 1815, the need to establish a more accessible seat of justice was being discussed. To reach Chillicothe or Gallipolis took a full day by stage coach. This was a principal factor in the organization of what is now Jackson County. Jackson County was organized on March 1st, 1816, named by order of the legislature after General Andrew Jackson. Acting on a request from the Ohio Legislature on April 16th, 1816, the United States Congress gave authorization to select on section of land within the Salt Reservation which could make the most appropriate seat of justice. The salt licks, however, were excluded from any transfer of ownership. All proceeds from the sale of the lands within this section would be used to build a courthouse and other public buildings for use by the country. It was during this time the town’s name changed from “Salt Lick” to “Jackson Court-House.” The State of Ohio also sought to save the salt industry by drilling deep into the sub strata to obtain stronger salt brine. A richer brine was found at a depth of about 400 feet, but would not rise to the surface. By about 1802, the handwriting was on the wall. The salt industry, as an economic base for Jackson, was doomed. From 1820, when there were five furnaces still in operation, their numbers rapidly declined. Eventually, production was halted altogether.

In 1826, in a report filed by a Scioto Salt Work Agent, the last sentence reads: “The making of salt at all Scioto Salt Works has been entirely abandoned.” Thus ended Ohio’s first industry.