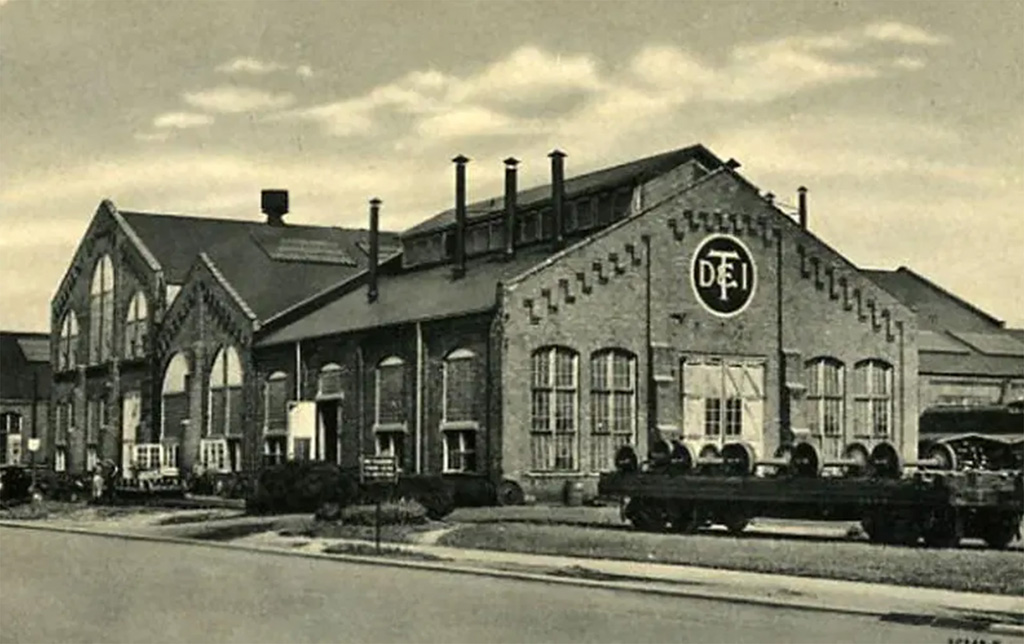 The Detroit, Toledo and Ironton Railroad Company (DT&I) was once known as the Detroit Southern Railroad Company. The Southern went into receivership on July 5th, 1904, with Samuel Hunt as Receiver. On Saturday December 17th, 1904, The Jackson Herald announced that the new Detroit Southern Shops would be located in Jackson on a 28-acre site on Athens Street known as the Jackson Racing Park: a one-third mile track with a grandstand. Local industrialist Edwin Jones (father of the late Lillian Jones) had received the announcement on Friday in a letter from Receiver Hunt. Jones had constructed the Cambrian Hotel in 1900 and had brought the Crown Pipe and Foundry Company to Jackson from Marietta, Ohio in 1902. He had previously been in negotiations for nearly four months with Hunt, making visits to New York City for conferences with F.E. Lisman, the principal bondholder of the road.

The old shops had been located in Springfield, Ohio, employing 250 to 350 men with a monthly payroll of $20,000. The prime factors in selecting Jackson for the new shops appear to have been that this county furnished the bulk of the traffic and the probability that the road would later be extended into the coal fields of Kentucky and West Virginia. The new shops in Jackson were to be larger than those in Springfield, up-to-date, and equipped with all modern machinery. All repair work for the whole road was to be done in Jackson, and perhaps 500 men would be employed, increasing the local population by 1,500 to 2,000 persons.

A portion of the agreement was for local citizens and businessmen to raise $28,000 by public subscription. Twenty thousand of the amount was to serve as a bonus or a “guarantee fund” to go toward the cost of the company moving from Springfield and the eventual construction of some 15 buildings. The cost of the sit was $6,200, and the remaining $1,800 was to be used to purchase a house that stood in the way.

A total of seven committees each appear to have been organized to canvas the citizenry. They were as follows:

Additional workers who assisted were: W.E. Evans, F.E. Bingman, James Ridenour, Robert Grime, W.H. Kelsey, Henry Hollbarg, W.C. Martin and George E. Morgan. C.O. Brown was the treasurer of the Car Shop Fund, and the Iron Bank (now the site of Barry Smith Law Offices) was the repository for the fund. On Monday, December 19th, 1904, the first day of the drive, $10,000 was subscribed, and by Thursday of that week, the subscriptions had reached $19,525. It was at that time that Jones pledged to assume all above $21,000. By Thursday afternoon, December 22nd, the entire $28,000 had been guaranteed, and at a final meeting, Samuel Hunt delivered a moving speech. He congratulated the citizens of Jackson for their excellent work and paid a high tribute to Edwin Jones. He stated that it had been impossible to avoid him, and the only alternative was to surrender.

The first plans called for a machine shop, 110 by 200 feet; a boiler shop, 75 by 100 feet; blacksmith shop, 60 by 80 feet; a mill, 75 by 145 feet; passenger car paint shop, 50 by 160 feet; freight car repair shop, 70 by 255 feet, store house, 50 by 100 feet; store room and office, 49 by 100 feet; oil house, 25 by 50 feet; and a round house with 18 stalls, 83 feet deep. On Tuesday, April 18th,1905, the contract for building the shops was awarded to the Pittsburgh Construction Company of Pittsburgh, Pennsylvania. On Sunday, April 23rd, workmen began removing the grandstand and fence surrounding the race track, and on the following Monday, workmen began laying track into the site. The reasons given for the long delay since the first announcement in December were that big items moved slowly, and there was also the forthcoming sale of the railroad. The sale came on Monday, May 1st, 1905, to Otto Bannard of the New York Trust Company, for $2,000,000. Samuel Hunt was to continue as president of the company. On Saturday, May 6th, the announcement came out of Detroit that the name of the Detroit Southern had been changed to the Detroit, Toledo and Ironton Railway.

By June 3rd, work on the shops was reported as progressing satisfactorily. The buildings were larger and more substantial than first thought possible. A force of men were also engaged in laying additional track. On June 14th, newly appointed manager R.K. Smith arrived in Jackson; well-satisfied with the progress and of the opinion that more land would be required. By the month of October, however, Superintendent Smith had discovered that the foundations erected by the Pittsburgh Construction Company were faulty, and he announced that he would complete the new shops under his own supervision. By November 15th, the foundations had been strengthened at all points, and a large force of men were at work on the roof of the main building. The grading for the round house was also progressing. On January 24th, 1906, it was reported that the roofs of the buildings were practically complete, and all doors and windows were in place. Two large boilers, to be used to provide power, had arrived, and the foundations for the roundhouse and store room were completed. Excavation for the turn table was down to a depth of 11.5 feet of the required 14. Clay had been used in filling around the foundations to prevent water from settling under the buildings. On Tuesday, April 3rd, master mechanic W.H. Haynen arrived in the city along with A.H. Powell who was to be in direct charge of the local shops and to supervise the installation of new machinery, valued at $38,000.

Executives appear to have changed as often as the controlling corporations. Prior to 1920, the railroad had been operated by six different corporations and had been in receivership four times, operating for two and one-half years by a bondholders committee. Originally, there was the Detroit, Jackson and Pomeroy Railroad incorporated on December 17th, 1874. Construction of the road began on a farm three miles south of Springfield on May 10th, 1876. The first rail was laid on the Jackson end of the line on December 7th, 1876 during a ceremony near the former depot. The brick masons at the shops site appear to have gone on strike in April, but were back at work on May 18th, and bricklaying had begun on the oil storage building. Mechanics were also busy setting machinery. Some 1,200 car loads of fill dirt had been dumped on the grounds.

The finishing touches were being applied to the new shops by July 11th, 1906. The machinery in the carpenter shop was in operation, and the machine shop and blacksmith shop were being prepared for active service. On Tuesday, August 21st, thirty-five skilled mechanics were added to the work force, making a total of 160 workers. Skilled mechanics were drawn from Springfield, Chillicothe and Portsmouth. An inspection committee published a notice to contributors in the Saturday, September 8th 1906 issue of The Herald that the railway company had complied with the provisions of the contract and should receive the $20,000 “guarantee fund”. The total cost of the shops appears to have been $150,000, some three times the amount anticipated. Sixteen thousand of that amount had gone into the cost of installing an electrical plant, a mechanical appliance for coaling the engines, and the steam heating system.

A portion of the letter is as follows: TO CONTRIBUTORS OF THE DETROIT, TOLEDO & IRONTON SHOPS GUARANTEE FUND: We, the undersigned committee, appointed by the subscribers for an inspection of the Railway Company’s shops to ascertain if the provisions of the contract have been complied with, beg leave to report as follows: After having made a careful inspection, find that the Railway Company have carried out every provision stipulated in their contract, having erected the buildings required and installed them with the latest and most improved equipment. They now have in their employ about 250 men and the probabilities are, that they will employ about double this number within the next year. That they have complied with the provisions of their contract fully, and are entitled to the guarantee fund of $20,000, no one can, or will question after having visited the shops. Respectfully submitted, E.T. Jones, John F Motaz, Daniel Crossin, A.L. Ervin, John J. McKitterick, E.W. Foster, J.L. Gahm, G. David and Edwin Jones.

On Thursday, October 18th, 1906, there was the first full payroll for the employees. Checks totaling in the amount of $12,418 arrived on the noon train from headquarters for payment of wages for the month of September. Some 250-400 men were now employed. According to the Thursday, October 19th 1906 issue of The Jackson Standard-Journal: “Everything is booming at the shops, and as fast as the facilities for operation can be enlarged, additional men will be put on.” On July 9th, 1920, the DT&I was purchased by Henry Ford and his son, Edsel Ford. The purchase included 454 miles of main line, 155 miles of side track, 3,200 cars, 85 locomotives and 27 passenger cars, extending from Detroit to Ironton. Henry Ford was known for order and efficiency, and when a train was on a siding, the crew was expected to polish the engine. Ford came to Jackson on Saturday, May 21st, 1921. A committee from the Chamber of Commerce escorted him about town and to the Scott building at the corner of Main and Church streets. Charles Scott was the local Ford dealer and constructed the building in 1917.

With the coming of restrictions imposed by the Interstate Commerce Commission, Ford sold his controlling interest in the road on June 27th, 1929 to Pennroad Corporation. Passenger service between Jackson and Ironton was discontinued on September 18th, 1932. On February 28th, 1951, the controlling interest was acquired by the Pennsylvania and Wabash railroads, and passenger service between Springfield and Jackson was discontinued on May 8th, 1954. The last steam engine was repaired at the Jackson shops in 1954, and all steam operations were discontinued in Jackson in 1955. The Jackson shops became a car repair facility.

On June 25th, 1908, the DT&I became a part of the Grand Trunk Western Railroad. Active management by the president of the Grand Trunk bean on August 1st, 1980. As the year 1983 was ending, there came the announcement of the permanent closing of the shops. As the last train departed Jackson on Tuesday morning, March 27th, 1984, a great era became history. The members of the train crew were: J. Mounts, engineer; L.J. Cause, fireman; William Collins, Jr. conductor; Steve Arnold, head brakeman; and Dave Sharp, flagman. Story Cool was the station agent.