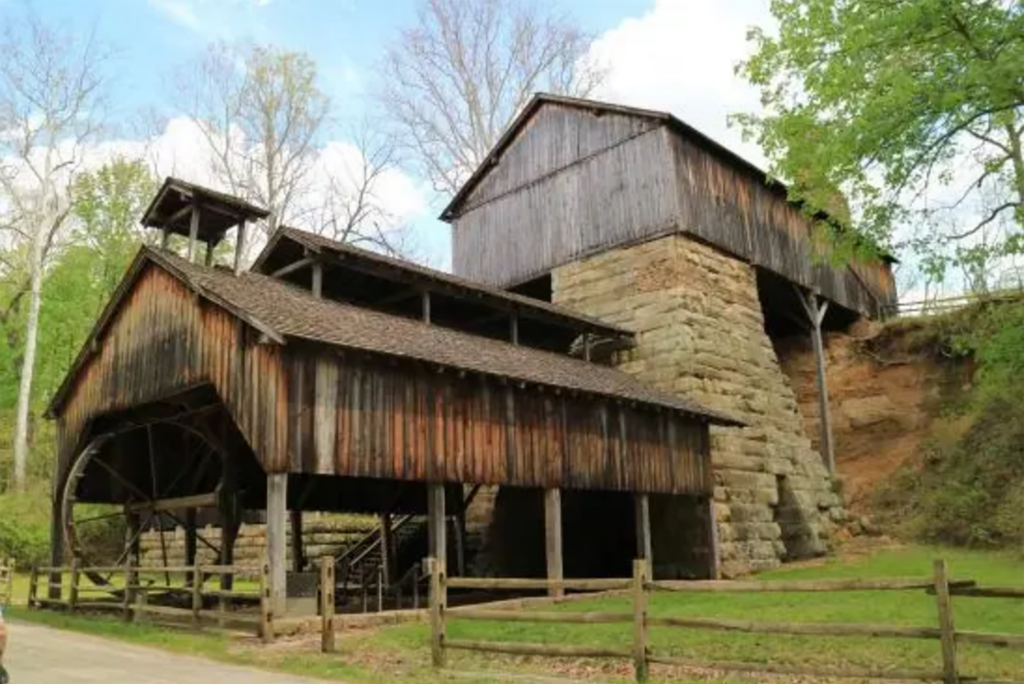 With the exception of the quarrying of miller’s burr stones and agricultural pursuits, very little economic growth occurred in Jackson or the county as a whole until the birth of the charcoal iron industry in the early 1850s. The iron industry ultimately brought railroads to the Jackson area. This led to a solid and steady economic and population growth. The county’s population was under 4,000 in 1820, and jumped to 10,000 by 1860. With this growth, Jackson became an important part of the emerging charcoal iron industry. Prior to 1850, only two iron furnaces existed in the county. Twenty-one furnaces were constructed in the Hanging Rock Iron Region between 1853 and 1856. Jackson County accounted for eight of these during that time, and by 1856 eleven furnaces were fully operational within the county.

By 1860, the town of Jackson had reached a population of 1,077 and prosperity continued as the Civil War created a great demand for the high quality Hanging Rock charcoal iron. The iron used in the construction of the Union ironclad, “Monitor”, came from nearby Jefferson Furnace, just west of Oak Hill. During the Civil War, General John Hunt Morgan and his troops paid Jackson a visit during his famous “Raid”. He and his two thousand troops spent the night in Jackson, arresting all men and older boys, burning the railroad station and rolling stock, looting stores and destroying a local Yankee supportive newspaper.

By 1869, many of the charcoal furnaces began to go out of blast. They were being superseded by a new series of coke or coal fired furnaces, able to draw up on the abundant coal resources of the region. Between 1864 and 1866, three new coke furnaces were established in the area. A second surge in coke iron furnaces occurred from 1872 to 1875 when six more stacks were built in the county. In 1882, Jackson County ranked third in state in the production of pig iron. Coal was a growing factor in the economic development of Jackson, with coal shipments rising from 10,000 tons in 1878 to 300,000 tons in 1880, making Jackson County tenth in the state’s production of coal.

By 1898 the county was the largest producer in the state with 89 mines and an annual tonnage of over 1,500,000 tons. This was in a time when all coal was mined by hand. Due to its impressive position in industry and population, Jackson became a favorite location for national political figures to visit. Jackson would host visits by William McKinley and President William Taft, sparking a trend which would later bring candidates Warren Harding and Thomas Dewey.

During the period between 1899-1900, iron prices soared and Jackson experienced a tremendous boom between 1902 and 1906. Inter-urban railroad (street car) service was introduced with the construction of the Wellston Jackson Beltline Railway. It was at this point that Jackson reached its economic zenith. As business increased, Jackson saw the number of railroads serving the area expand. At its height, Jackson was serviced by four railroads: The Baltimore and Ohio (B&O), The Detroit, Toledo and Ironton (DT&I), The Hocking Valley–later known as the Chesapeake and Ohio (C&O) and finally, the Wellston and Jackson Belt Railway.

In 1908, Jackson County saw the construction of its last iron furnace. At the same time, the southern Ohio iron industry was beginning to decline due to increasing competition from the cheaper and higher quality Great Lakes region ores. By the 1930s the production of clay products had taken up some of the economic slack, but the prosperous boom days associated with the iron and coal industries were over. With the coming of World War II, Jackson found itself with two blast furnaces. These were prime employers in the area, continuing after the war with Globe Furnace closing in 1960 and JISCO closing in 1972.