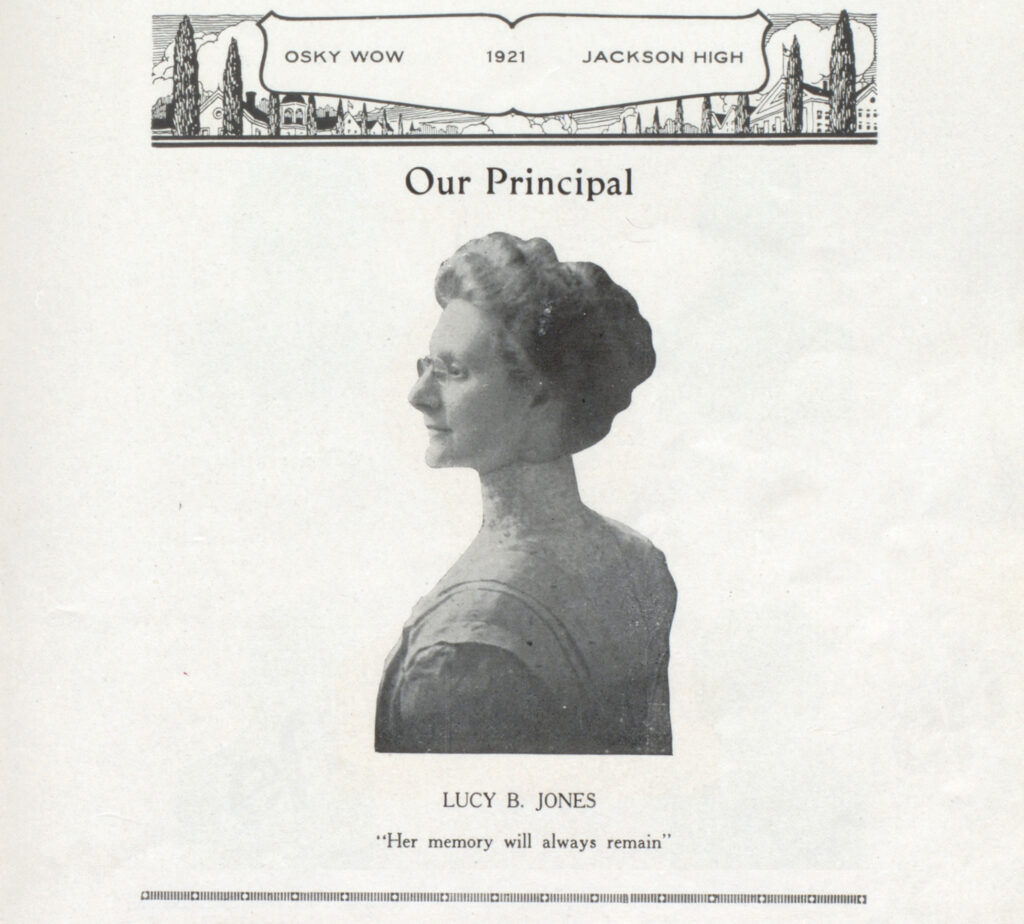 The following article pertains to a lady who contributed much to Jackson County’s illustrious past in a very professional way. This dear lady, now deceased, wrote a book in 1942 entitled: “Early Jackson.” It is a splendid historical account dealing with Jackson in the days of yesteryear.

Romaine Aten was born in Jackson County on November 11th, 1873, one of four children of Eli and Sarah Helphenstine Aten. Her father was a cabinet maker and together with Harry Marshman they operated a furniture store and funeral home at the southeast corner of Broadway and Pearl streets in Jackson. This partnership lasted for 34 years. Romaine graduated from Jackson High School and shortly thereafter married Benner Jones, who was first a practicing attorney, then later mayor of Jackson as well as a judge in the county judicial system.

“Aunt Rome” as she was affectionately called, was county chairwoman and a life member of the Ohioana Library Association. This organization honored noted accomplishments in the arts by fellow Ohioans. “Aunt Rome” also received an award from President Herbert Hoover, for work done for the government during World War I. She also served as a trustee of Rio Grande College, and was a lifetime member of the Women’s Literary Club of Jackson. It was to this club that she presented a paper on Jackson County History, later expanded and published as a volume entitled “Early Jackson”, in 1942. For Ohio’s Sesquicentennial, she combined her talents with those of Anna Mae Jenkins to write “The History of Jackson County. Aten was also a historian of the Jackson High School Alumni Association. She died on June 24th, 1963 at 89 years of age.

Mrs. Anna Mae Jenkins, along with Romaine Aten Jones, co-authored “The History of Jackson County, Sesquicentennial Edition” in 1953. Anna Mae Evans was born in Jackson County in 1886. She attended the old South Street School in the city until 1901 or 1902. At this time, the family moved to a farm home in Jefferson Township. As a result of this move, Anna Mae began attending school at the Central Building in Oak Hill. Graduating from high school in 1905, she attended the Portland Academy in Oak Hill until she passed the Boxwell Examinations, qualifying her to become an educator.

For the next five years of her life, she taught in one-room schoolhouses in Jefferson, Hamilton, Liberty and Madison Townships. Some schools of the past where she instructed students in the three R’s were Oakland, Pyro, Comer andMaybees. She was married to Mr. Robert W. Jenkins in 1910. They lived on a farm near Oak Hill until 1927, raising a family of four children: two sons and two daughters. The family moved to Jackson in 1927. Mrs. Anna Mae Jenkins passed away in 1983.

Lucy B. Jones was a renowned Jackson County Educator of the past. It was said that during the first year Miss Jones taught school, she rode horseback to and from the school each day. Her salary was $40 a month. She continued teaching in the Jackson Schools instructing in every subject save for languages for 50 years. For 15 of these years, she served as Principal of the high school at Kinnison. The tall, red-haired lady was known as a firm disciplinarian as well as a dedicated teacher.

Julia Ann Bundy was born on a farm at Wellston in Jackson County, Ohio on June 17th, 1847. Miss Bundy’s place of birth was a log farm house which had been build by her grandfather in 1808. The Bundy family was one of the most prominent and influential in southern Ohio’s history, particularly in regard to politics. Julia Ann’s father, H.S. Bundy, besides being a highly respected attorney, was at one time a Whig Congressman. The City of Wellston was laid out on the Bundy farm by Harvey Wells in 1873.

Concerning H.S. Bundy, at one time during its early history, Ohio held what were then known as “Black Laws’. A black man could not testify against a white man in a court of law. Congressman Bundy was very instrumental in getting this unjust law repealed in the State of Ohio.

Julia Ann Bundy graduated from Ohio Wesleyan Female College at Delaware in 1886. She met Captain Joeseph Benson Foraker, whom she married in October of 1870. Mr. Foraker was described as being a very brilliant man who was active in the Republican Party. He served for two terms as Governor of Ohio, being inaugurated in 1886. He also served in the U.S. Senate for several years. In 1932, when Julia B. Foraker was 84 years old, Harper and Brothers Publishers printed her book entitled “I Would Live It Again.” This book is said to deal quite extensively with Mrs. Foraker’s early life at her Jackson County home in Wellston. Julia Bundy Foraker passed away in July of 1933.

Courtesy of  Jack Rhea
Researcher’s Note: Source for much of the following was
“The History of Jackson County, Sesquicentennial Edition, 1803-1953”.