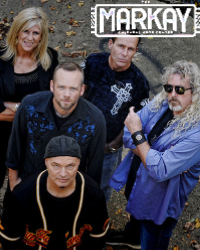 New Frontiers: The Definitive Journey Tribute was formed in 2015 by guitarist Jimi Goare, with the idea that the MUSIC of this legendary band be paid its proper due. Instead of emulating other tributes that “look” like Journey, New Frontiers chooses to focus on recreating that classic Journey sound that everyone knows and loves. New Frontiers performs the album versions of songs from Evolution (1977) to Trial By Fire (1996) including Steve Perry’s first solo album. The band is able to cover all vocal parts with ease, delivering a full-on, and accurate concert experience. The bottom line? If you want more than a look alike, Journey hit parade – contact New Frontiers today and get ready to take a ride back in time, to relive those crazy, summer nights when Journey ruled the airwaves! Tickets are $15.00 advance and $20.00 day of.